COVID-19 and the impact on developmental discourses

The pandemic for sure changed how we approach not only everyday events and lives but also bringing extremely diverse discussions over societal trajectories and dynamics. In this article, I am going to argue about the importance and the impact Covid-19 will have on developmental practices and discourses, briefly introducing development theories and nowadays criticisms, focusing on dominance in policy transfer and policy implementation. The case for Africa might help the further improvement of development discourses, especially concerning the “white gaze” in development. The focus of this article won’t be on why Africa has been –partially – successful in containing the spread of the virus, but more on the impact that this could have on development thinking. Using the Foucauldian lens, we want to investigate the dominance of a set of knowledge that is extremely westernized and “colonized” (Escobar, 1995).

Analyzing the data, we can still see that the influence of the African region on cumulative cases is extremely limited. These surprising data also point out how badly the so-called Global North performed in this regard. Due to the rapid measures implemented and previous existing infrastructures for pandemics, the response of the continent on the issue has been better than the modern, western one. The main idea is that Covid-19 might expose how flawed our conception of development is and how important it can be in changing the perspective. 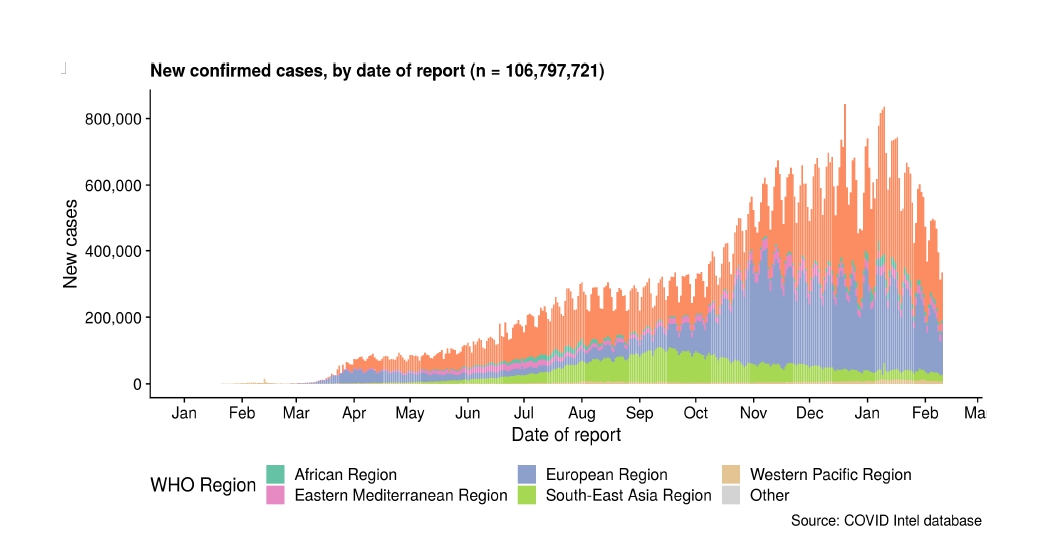 Notes on developmental theories and discourses

Starting from the 1970s, mainstream development theories have been challenged by the so-called Post-Development thinkers (such as Escobar, Foucault, Ferguson). They thought that the dominance of the Global North in shaping the developmental dynamics was outdated. They reflected on the absolute necessity of re-shaping how the so-called Global South was described, as having problems and needs rather than the capacity to make decisions and devise solutions.

This socioeconomic dominance of the Global North in development has a long trajectory and understanding the importance of the colonial roots in shaping these dynamics is extremely important (Shilliam, 2014). Of course, the longstanding power imbalances have changed the way in which we approach development, from racialized constructions going to civilizing missions (Kothari, 2006). The world we live in is the product of racialized structures and institutions, which changed trajectory through time but maintained certain aspects of cultural dominance. This dominance is embedded in the approach to development from an international perspective.

The concretization of these power imbalances is shown in the decision of implementing Millennium Development Goals (from now on, MDGs). The ideological basis of MGDs is to transfer policies that worked in the so-called Global North to the Global South, reflecting the political dominance of the North. It presumes only one “right” way of developing, the western one, lacking in understanding their positionality. Also, MDGs implementation can be questionable. As Danielsen (2017) explains, in some cases the implementation has not been conducted to secure the “progress”, but to satisfy the benchmark. This approach does not provide answers and solutions to the problems the Global South has but only tries to reproduce a model that has been partially successful in the Global North. Policy transfer, according to international development, is meant to be only when coming from the North to the South.

Sen (1999) in the introduction of “Development as Freedom” points out how differentiated the concretization of development might be. The benchmarks that we’ve so far used have not been able to capture properly the idea of development and thus we forgot to take into consideration that it is a globalized phenomenon. To support its thesis, the study of Eve Bratman (2011) on Washington D.C. points out how far western countries can be from achieving development in their territories. The lack of political representation shown, the racial segregation in certain areas of Washington shows how, if compared to Africa using western benchmarks, it could be defined as a Third World City.

Covid-19 and the change of perspective

Washington D.C.’s developmental paradox is functional and extremely linked with the discussion over Covid-19.  Some African states were able to provide an extraordinary response in reaction to the pandemic. This shows how important it is to discuss developmental practices. The usual North-South dichotomy, in this case, is extremely reversed: what could have been a humanitarian catastrophe in the continent has been tackled with the proper time, even in scarcity of resources. The solutions provided have been effective in tackling the pandemic also because of the structural limitations of the health system in these countries. Because of that, they worked better and on time on tracing and this has provided the most effective tool to contain the spread of the virus. Also, the previous experience with other pandemics (recently, Ebola) has provided the countries with infrastructural knowledge to tackle and contain the virus.

In the case in which western countries have dramatically failed, African countries seem to have provided a better answer even without the same resources. For instance, the ability to co-operate on a local level with several important entities has been crucial in the response to the pandemic for Senegal (Lemmi, Simoncelli, 2020).  Also, the capacity to implement the facilities in the pandemic, opening testing centers operating all over the continent have shown how rapidly also the so-called Global South can intervene in difficult situations.

As Makoni (2020) says, countries such as Mauritius have been extremely successful in handling the situation and stabilizing the number of cases well below the expected numbers.
WHO sources thought that Mauritius could have been one of the worst at-risk countries if the virus would have spread in the country, with over 90000 expected contagions and 800 deaths. In October 2020, the registered number of cases was about 400 and only 10 deaths. This was the case because of the governmental capacity to increase the level of awareness, the sensibilization of the public, and the speed to which they were able to implement the lockdown measure already on the 19th of March (three days after the first registered cases) and quarantine, screening measure well before the first cases in the country.

Overall, the capacity of creating testing centers (at the beginning of the pandemic, there were only 2 institutes capable of testing) has shown that also African countries can be successful, with now testing centers in every country.

Covid-19 has exposed lots of flaws in nowadays socioeconomic dynamics. But, in development, it might have helped in shaping the right attitude towards development, showing how important and relevant the policy transfer South-North might be. The astonishing results achieved by African countries can point in two main directions. One one side, to better international cooperation, on the other to bigger consideration of policy implementation in the Global South. In this particular regard, I really think that a  punctual picture of the impact of Covid-19 and the regulations adopted by the continent might foster the shift from the “white gaze” to a more democratic way of approaching development at all. Deconstructing development practices that have so far relied only on the Western set of knowledge is the way in which we can rebuild knowledge and the discourses in a less “colonized” way.

Analyzing the discourse and detaching the colonial part of it is what, in the Foucauldian lens, is needed. The case for the pandemic might have boosted this critical thinking into further and global acceptance.

As always, we publish our articles to encourage debates, and to spread knowledge and original and alternative points of view.